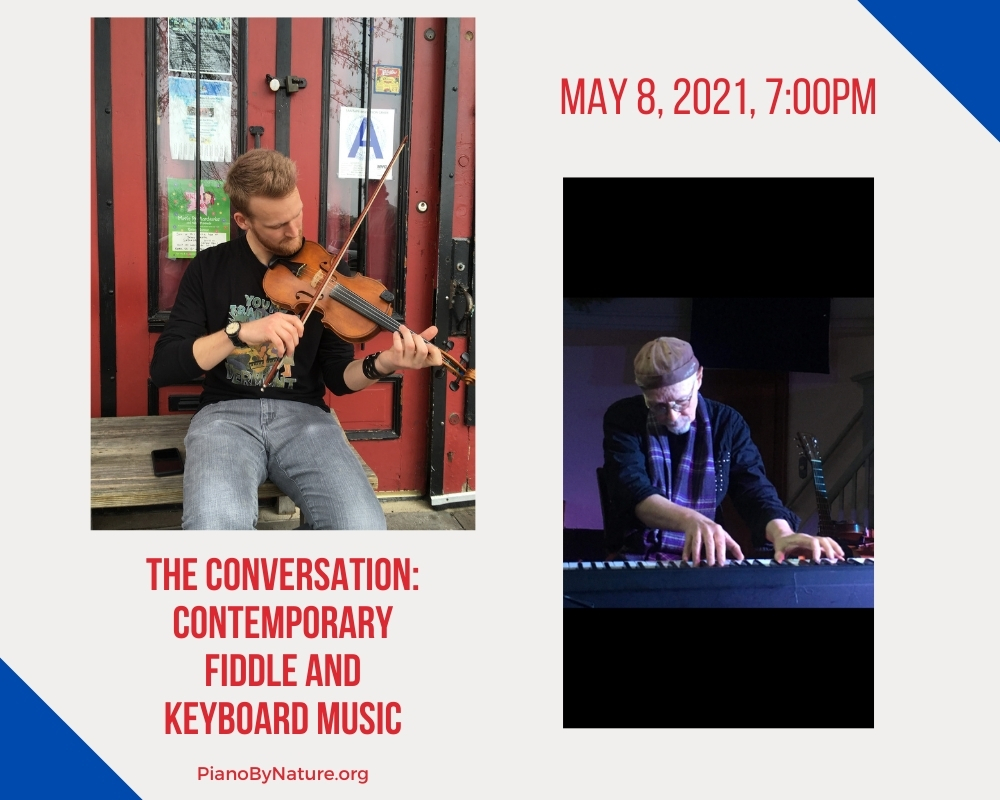 The outstanding musicians Pete Sutherland and Oliver Scanlon have graciously offered a curated evening of American roots music spanning folk, bluegrass and country, and featuring piano, fiddle, and banjo. This special event will consist of dazzling music both old and new, chosen especially for our Piano by Nature audiences. And it promises to be a glorious and spirited home-grown celebration of Vermont folk music—without the drive across the lake!

On May 8th, Piano by Nature will present these two dynamic performers in a zoom program beginning at 7PM, free of charge. If you wish to join the live zoom event on May 8th, all you need to do ensure you are subscribed to the Piano by Nature mailing list—if you’re not sure, sign up at the bottom of any page of the Piano by Nature website (pianobynature.org). We will send you a link on the day of the concert and then all you need to do is ‘press play’ when the ‘doors’ open anytime after 6:30PM EST. If you wish to listen later or listen again, go to Pete and Oliver’s concert page on our website to find the published link to their concert. Then watch it as many times as you like for two weeks!

We hope to see you on the 8th and look forward to experiencing this very special event together!

“The Conversation is compelling not only from the sheer talent of its personnel—all are multi- instrumentalists, singers and songwriters—but also a well-oiled machine and wholly original compositions, such as Sutherland’s “Up and Blow Away,” blending the traditional musical themes of the project. They represent what’s best about the folk-bluegrass genre, with a strong reverence for the old, but a clear vision of the new and the ability to meld the two.” —Sylvannia Garutch, Elmore Magazine

A warm-voiced singer-songsmith and accomplished multi-instrumentalist, Pete is known equally for his potent originals and his intense recreations of age-old ballads and fiery fiddle tunes. The American Festival of Fiddle Tunes said Pete “covers the map and shines with a …pure spirit which infuses every bit of his music, and cannot fail to move all who hear him.” He has been on staff at dance and music camps coast to coast and is a widely known year-round teacher and performer at home. Sutherland is a veteran of many touring and recording groups including Metamora, Rhythm In Shoes, The Woodshed Allstars, Woods Tea Company, Ira Bernstein’s Ten Toe Percussion and is a founding member of the long-running ‘contradance jamband’ The Clayfoot Strutters. He is also a producer with over 80 projects under his belt, and a prolific songwriter covered by the likes of Cathy Fink and Marcy Marxer, Jay Ungar and Molly Mason, Nightingale and Altan.

A soulful multi-instrumentalist and spellbinding composer, Oliver began his journey of musical discovery playing the viola with the Vermont Youth Orchestra when he was nine. Shortly after he was introduced to his mentor Pete and the immense parallel universe of fiddle music! His keen interest in fiddling led him to seek out further learning and performing opportunities through Mark Sustic’s “Fiddleheads” program, and soon he began attending music camps where he studied various styles with Alan Jabbour, Kimberley Fraser, Andrea Beaton, Eric Favreau, and other master fiddlers. In 2008, Oliver and few talented middle school friends formed a group, The Irregulars, a six-piece outfit that has played scores of local dances and festivals, and took first prize in the 2011 Young Tradition Vermont talent contest! Then in 2013 he both co-founded the Posse and became the youngest member of Pete’s long-running dance band The Clayfoot Strutters. He released his solo album “The Pond Jam” in 2014, which was both his senior project before graduating high school and a testament to his passion and artistry. Recognized not only for his mesmerizing playing, but also for being a meticulous sound tech, Oliver stays quite busy when not on the road with the Posse!

Some previous performances from Pete and Oliver and Pete’s Posse: