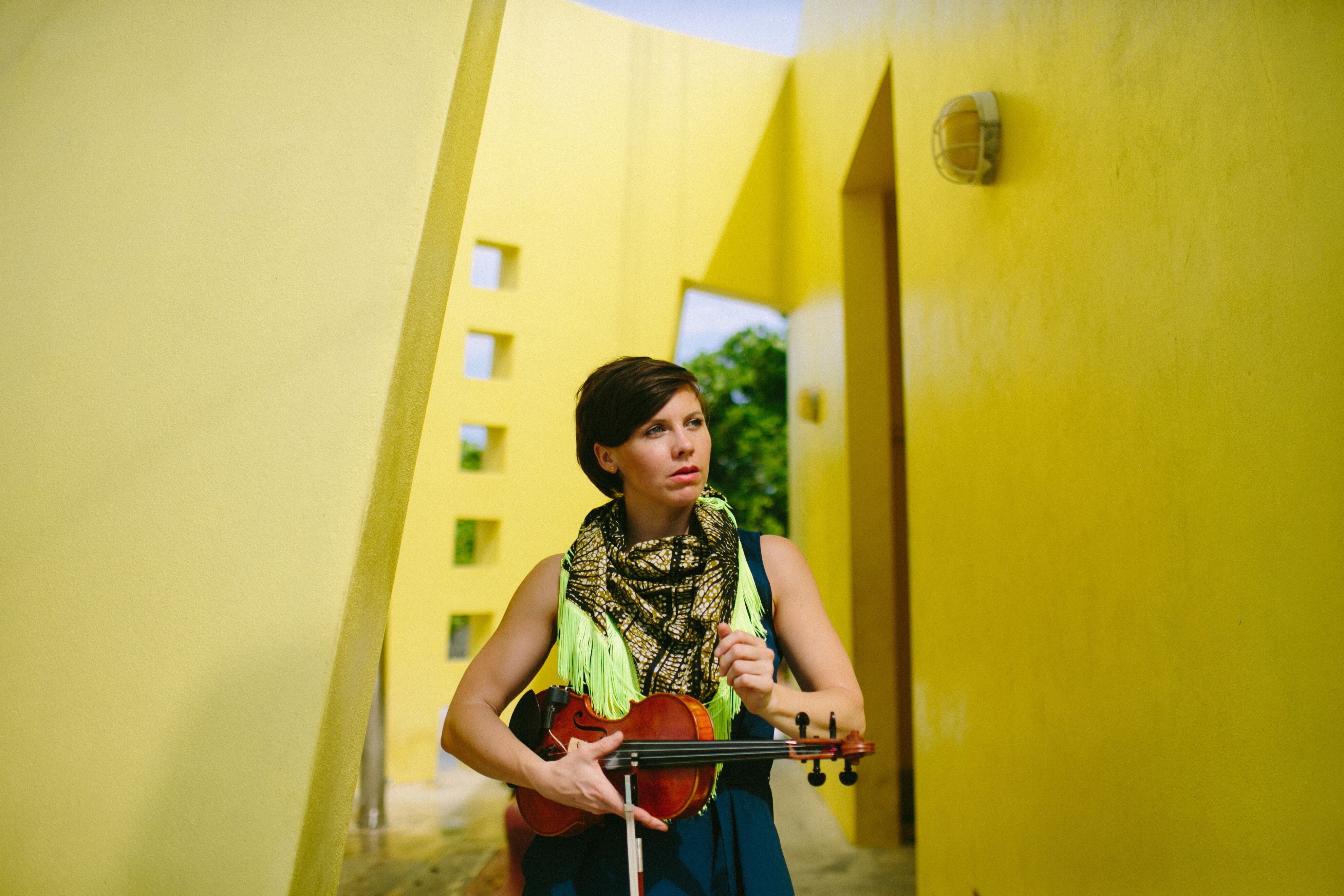 Sarah Neufeld is a violinist and composer based in Montréal, Canada. Best known as a member of Arcade Fire, she is also a founding member of the acclaimed contemporary instrumental ensemble Bell Orchestre, and most recently as half of an exciting new duo with renowned saxophonist Colin Stetson.

Neufeld began developing pieces for solo violin in a formal sense in 2011, though she has made improvisation and solo composition part of her process and practice since first picking up the instrument at a young age. Neufeld counts Bela Bartok, Steve Reich, Iva Bittova and Arthur Russell among the formative influences for her solo work, in tandem with an ear for the textures and sensibilities of contemporary electro-acoustic, avant-folk and indie rock music.

Neufeld’s debut solo album Hero Brother, released August 20/2013 on Constellation Records, indeed channels all of the above, flowing through shifting atmospheres and oscillating between restrained, stately ambience, emotive études, and raw kinetic energy. Small touches of wordless vocalisation, harmonium and piano supplant the violin in a few places. The album was recorded in Berlin by pianist and producer Nils Frahm, with Neufeld’s performances captured in a number of locations with site-specific acoustics, including an abandoned geodesic dome.

On February 26, 2016 Sarah Neufeld released her second full length album, The Ridge, via Paper Bag Records and Kartel Music Group. It is a body of work that sees Neufeld moving away from Hero Brother’s classical minimalism and sepulchral ambience, and into the world of rhythmic pop minimalism. The new album employs more emphasis on vocalizations than Neufeld’s previous works; the interplay between Neufeld’s voice and violin has become strongly integrated and narrative. The album also features Arcade Fire’s Jeremy Gara on drums, adding greater layers to the compositions, creating an intense, dynamic atmosphere, and a captivating listen from start to finish.

In 2016, Neufeld will be touring extensively as a soloist in support of The Ridge.

Praise for The Ridge.

“Primarily made up of longer, grandiose songs that follow the whimsical sound of Neufeld’s violin and calming voice, The Ridge balances a darker tone with a breathtaking feeling.” – Stereogum

“it is crafted with care and precision and will hopefully open the door for many to the world of instrumental, abstract orchestrated composition… strikingly gorgeous and textural ” – Under The Radar

“Neufeld’s focused, restless recordings invite the listener to share in the intensity of her ritual as a performer, creating a necessary and refreshing air of intimacy.” – Pitchfork

“a gorgeous album from start to finish, and it’s impressive how captivating it is for something that’s often so minimal.” – Brooklyn Vegan