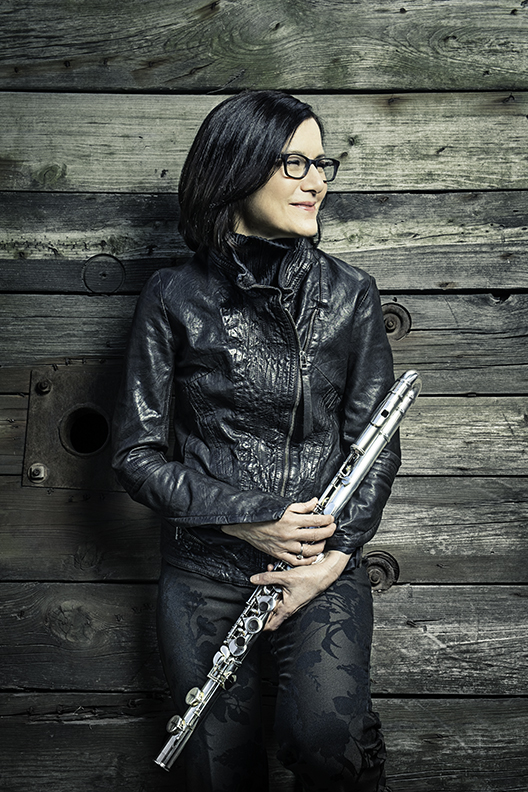 Receiving critical praise for five CD’s as a leader, Sight Unheard (w/Dave Douglas, Kenny Werner) on GM Recordings and Moving Forward, Standing Still on the Omnitone label (w/ Ralph Alessi, George Colligan) received four stars from DownBeat. Solace (Sunnyside) made several “Best of ’08” lists. Her fifth, In This Life (w/Amir ElSaffar, Taylor Haskins, John Escreet), out October 8th, 2013 on Sunnyside and Inch By Inch, Yard Byard (by the cooperative band w/Jerome Harris and George Schuller) out November, 2014 on GM Recordings, both received four stars in DownBeat. Recent media attention for In This Life brought features on WBGO’s RADAR and NPR’s All Things Considered, reviews in The New York Times, DownBeat, JazzTimes, All About Jazz, etc., making the “Best CDs of 2013” lists including The Boston Globe, ITunes, Rhapsody.com, EMusic.com and Francis Davis’ NPR Music Jazz Critics Poll. The Jazz Journalists Association nominated Jamie for “Flutist of the Year” and her band The Jamie Baum Septet+ was nominated as “Best Midsize Ensemble of the Year” in 2014. She has been in the DownBeat Critics Polls annually since ’98.

Among the many awards for composing, Baum was awarded a 2014 Guggenheim Foundation Fellowship and MacDowell and UCross residencies. She won the ‘99 International Jazz Composers Alliance Award, the 2010 CAP Award (American Music Center) and the 2003 New Works: Creation and Presentation Award and the 2007 Encore Award, both components of the Doris Duke/Chamber Music America Jazz Ensembles Project. Through a highly competitive auditioning process, she was chosen to tour for the DOS/Kennedy Center Jazz Ambassador program from ’99 to ‘03.

Ms. Baum is an active clinician supported by Altus Flutes (since 1993), offering her ground-breaking “A Fear Free Approach to Improvisation for the Classically Trained Flutist”tm at many NFA Conventions, Flute Societies, colleges and music & art high schools worldwide. Ms. Baum taught at Berklee College of Music (2011-2013) and has been on the faculty of the Manhattan School of Music since 2007 and on the roster of teachers at The New School Jazz Program.