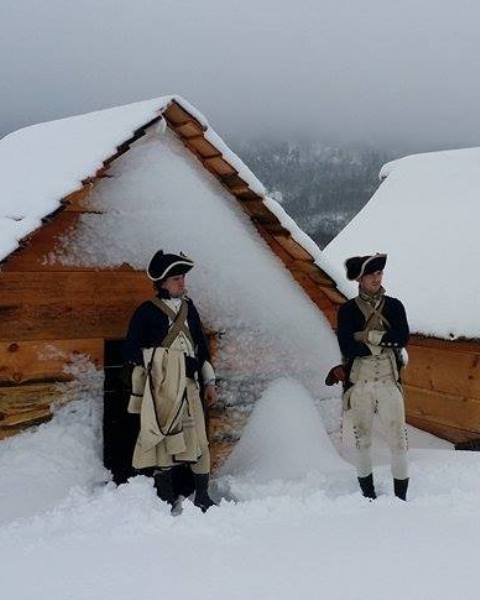 Was the United States united in 1776? Meet Pennsylvania and Massachusetts soldiers left behind to guard Ticonderoga in the early winter of 1776-1777 at Fort Ticonderoga’s upcoming living history weekend “Riot! Yankees versus Buckskins” on Saturday, January 17 from 10 am – 4 pm. See what life was like for these different American soldiers when in the confines of winter quarters and discover the cultural divide between the troops at Ticonderoga as they fought for liberty in the American Revolution.

Event tickets are $10. Free admission is offered to Fort Ticonderoga members and children age four and under. For more details visit www.fortticonderoga.org or call 518-585-2821.

10:15 AM Fort Guided Tour
Travel back to Fort Ticonderoga in December, 1776. How did American soldiers face British attack that fall? Who was left behind after the British withdrew and winter advanced.

11:00 AM Musket Demonstration
Watch the Fort’s guard turn out for duty. See the different arms they carried and how these guards would respond together if the Fort were under attack.

12:30 Philadelphia Artisans and Yankee Ingenuity (Mars Education Center Great Room)
Join Curator of Collections, Matthew Keagle, to explore the divide between Pennsylvanians and New Englanders through remains of their clothing and equipment. See two different approaches to fielding soldiers in the fight for independence.

1:15 PM Fort Guided Tour
Travel back to Fort Ticonderoga in December, 1776. How did American soldiers face British attack that fall? Who was left behind after the British withdrew and winter advanced.

2:00 PM “A Singular Kind of Riot Took Place”
Watch a campaign season’s worth of tension boil over as Captain Thomas Church of the 4th Pennsylvania Battalion confronts Colonel Asa Whitcomb of Massachusetts. How will a personal fight between officers play out with armed soldiers and loyalties inside the Fort?

3:00 PM Fort Guided Tour
Travel back to Fort Ticonderoga in December, 1776. How did American soldiers face British attack that fall? Who was left behind after the British withdrew and winter advanced.
4:00 PM Site Closes to Visitors

Pork, Pigeon, & Pottery (Ground Floor of the Soldiers’ Barracks)
In this exhibit of original artifacts recovered from the ruins of Fort Ticonderoga explore the meals of soldiers and officers who served inside this ‘Old French Fort.’

It Would Make a Heart of Stone Melt (Ground Floor of the Soldiers’ Barracks)
Smallpox was a very real threat for the Continental Army in Canada. In this visually compelling exhibit see how this disease, as well as battlefield wounds, was handled in the Revolutionary War.

Soldier’s Quarters (Ground floor the Soldier’s Barracks and Officer’s Barracks)
Meet some of the soldiers ordered to stay behind at Ticonderoga. How did they survive here in the winter? See the few comforts available to soldiers in these old drafty rooms.

Officer’s Quarters (Second floor of the Officer’s Barracks)
Enter the quarters of Massachusetts Colonel Asa Whitcomb, with his enlisted sons hard at work. Is this their family quarters or is this a misuse of army funds? Make up your own mind.

Public Store (Ground floor of the Officer’s Barracks)
See the array of supplies and tools needed to maintain an army into the winter at this front line post. Watch as new bedding for the barracks of Fort Ticonderoga are sewn and stockpiled.

Soldier’s Huts (Down the King’s Garden Road)
Awaiting orders to move inside the barracks of Fort Ticonderoga, Pennsylvania soldiers live together in the small houses or huts that they built back in September. Step inside to see how these soldiers stayed alive as winter set in.