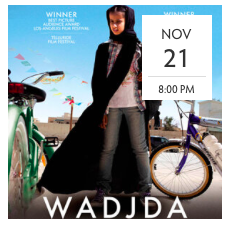 In order to help keep our community healthy, we won’t be showing movies at the Grange this fall. Instead, the Home Together Fall Film Series has picked four movies you can watch anytime on your own at home and then join a Reel Talk via Zoom. You can listen to a provocative discussion about the film between two special guests and submit your own questions. We can be Home Together with great movies and lively speakers until we can be together in person in front of the big screen at the Grange again.

This film streams on Netflix.

10-year-old Wadjda challenges deep-rooted Saudi traditions in a determined quest to buy a bicycle. When everything goes against her plans, she sees one last chance in her school’s Quran recitation competition and the large cash prize for first place. The first film ever shot entirely in Saudi Arabia, Wadjda is the story of a girl determined to fight for her dreams. Wadjda is also the first Saudi Arabian feature to be directed by a woman.

REEL TALK Speaker: Akanksha Misra is a professor of Gender and Women’s Studies at SUNY Plattsburgh. Her work focuses on violence against women and children as well as cultural and gender awareness in Turkey and India.

REGISTER FOR THE REEL TALK HERE