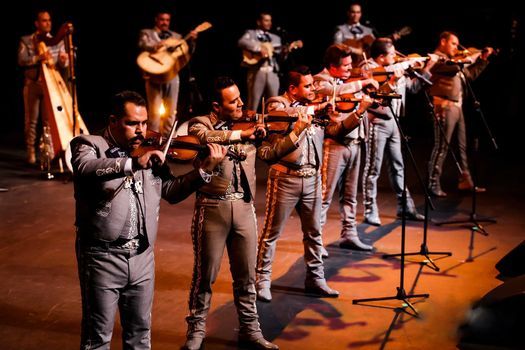 On February 12th, 2022 Piano by Nature is thrilled to continue our exploration into music of the harp, presenting mariachi virtuoso Sergio Alonso in an exciting and inspiring zoom event unlike any other. Mr. Alonso will ‘bring’ his three-time Grammy-award winning large ensemble Mariachi Los Camperos to our online concert hall, and give us the inside scoop on how their group grew into a musical powerhouse, performing in such prestigious concert venues as Lincoln Center, the Kennedy Center, and the White House.

The Grammy award-winning ensemble, Mariachi Los Camperos was founded in 1961 by Jose Natividad “Nati” Cano Ruiz, who played a fundamental role in the development of mariachi music in the United States. His mission was to train and mentor new generations of mariachi musicians and his dream was to take mariachi performance out of the local Cantina and move it into the concert hall to be shared with the world.

Piano by Nature hopes you will join us for a deep dive into the mariachi traditions of Mexican folk music, which hail back as far as the 18th-Century, and we also look forward to gaining insight into the incredible mentorship system which has kept mariachi alive for so long.

Join us online Saturday, February 12th at 7PM EST for an inspired concert of culturally rich and vibrant music performed by Sergio Alonso and the Los Angeles-based Mariachi Los Camperos, considered by many to be the finest mariachi ensemble in the world. See you there!

To join this free concert, make sure you are subscribed to the Piano by Nature email list. Sign up at the bottom of any page of our website pianobynature.org and we will send you updates and the link needed for the concert closer to the date. VIVA el mariachi en las Adirondacks!

Learn more and see video examples of this band on pianobynature.org here.