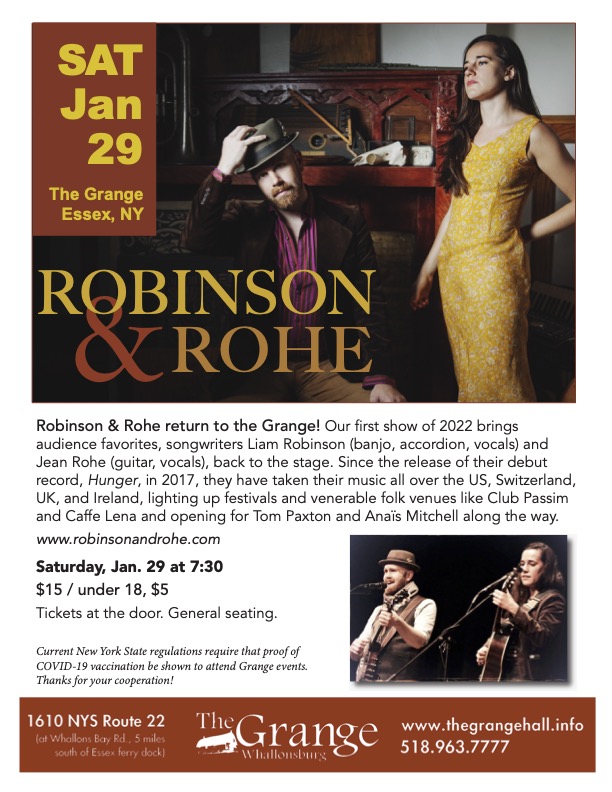 Robinson & Rohe is the duo of American songwriters Liam Robinson (banjo, accordion, vocals) & Jean Rohe (guitar, vocals). Since the release of their debut record, Hunger, in 2017, they have taken their music all over the US, Switzerland, UK, and Ireland, lighting up venerable folk venues and festivals from Club Passim to The Green Note and opening for Tom Paxton and Anaïs Mitchell along the way. In April 2021 they were the first act to welcome live audiences back to Caffe Lena since the pandemic began.

After a touring hiatus in 2019, during which Liam served as vocal-arranger and music-director of Anaïs Mitchell’s smash hit Broadway musical Hadestown and Jean released Sisterly, an award-winning record of her own, Robinson & Rohe are set to release a new collection of songs, Wait & See, in 2022, showcasing their skill as producers and arrangers. This record builds on the keen-eyed writing, detailed arrangements, impeccable duo singing, and modern American themes explored in Hunger but takes a new tack with the addition of drums, electric guitars, horn section, and vocal ensemble.

In addition to his central role in the success of Hadestown, Liam was an original cast-member of Warhorse on Broadway and a long-time member of the Becca Stevens Band. Jean’s writing has garnered accolades from far and wide; most recently her record Sisterly won Best Adult Contemporary Album at the 2019 Independent Music Awards. She is perhaps best known for her video single, “National Anthem: Arise! Arise!” an unflinching alternative national anthem which has now been performed and recorded by scores of choirs and artists across the US.

On sale at the door. General admission.

Because of current New York State regulations, proof of COVID-19 vaccination must be shown to attend Grange events. Thanks for your cooperation!