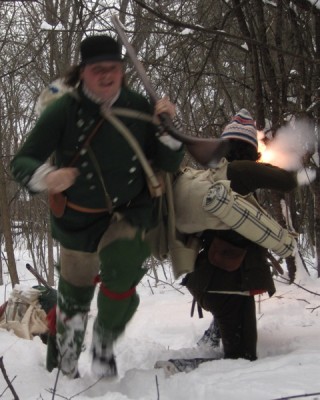 Fort Ticonderoga’s “Fort Fever Series” returns this winter with monthly programs January through April 2015. Programs take place on Sunday afternoons at 2 pm in the Mars Education Center. The cost for each program is $10 per person and will be collected at the door; free for Members of Fort Ticonderoga.

January 11th, “Clothing Rogers’ Rangers”— The infamous Rogers’ Rangers played an important role in the French & Indian War history of Fort Ticonderoga. Despite the numerous accounts of them spying on the French encampments and their attacks on wood-cutting parties, their clothing and appearance is something of a mystery. Artificer Tailor Gibb Zea will discuss and translate the documentation known about the rangers to give a better idea of what they wore, how they wore it, and what textiles one might expect to find on a ranger in the 1750s. A focus on the clothing will revolve around the appearance of Rogers and his men as they would have appeared to the large French scouting party that they met on March 13, 1758, the day of the Battle on Snowshoes.