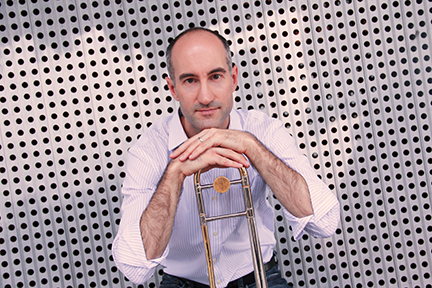 For the last six years, Alan Ferber has been recognized as one of the leading trombonists of his generation in Down Beat’s International Critics’ Poll and Readers’ Poll. He has released six albums as a bandleader, all of which blur the traditional boundaries of jazz through an intriguing mix of influences. The Wall Street Journal describes his music as “somehow both old school and cutting edge.” Alan’s newest release, March Sublime, features stunning new music for big band and was nominated for a 2014 Grammy award in the ‘Best Large Jazz Ensemble Album’ category. His Nonet ensemble is a recipient of a 2013 Chamber Music America New Jazz Works grant, funded by the Doris Duke Foundation. The resulting piece will be performed at the Soundwaves Concert Series on July 2. Alan is a professor of jazz trombone and composition at NYU’s Steinhardt School.

About the Project, “Roots & Transitions”

2013 brought the birth of my first child, and thus a year of major transition. I find myself fascinated with the human growth process, and our constant cycling through periods of comfort, where we seem to be able to ‘put down roots,’ versus periods of transition, discomfort, and ultimately, growth. As I watch the process physically play out in my own family, I am drawn to reflection on how this same process governs growth in all aspects of our lives. Similar trends of growth have threaded through my years of development as a composer.

My current compositional goals include a striving for increasingly simple and emotionally direct musical germs from which to spin out developed ideas; germs with greater impact and immediacy rooted in their simplicity. These simple motives give rise to a seemingly endless string of possibilities for musical development, and it’s this process that fascinates me most and is the springboard for my Roots & Transitions compositions cycle.

‘Roots & Transitions’ includes eight movements stemming from one simple, direct, and emotionally impactful musical germ. From there I explored eight vastly different imaginings and recontextualizations of the main theme, moving through movements having a sense of “rootedness” and “comfort” versus movements infused with the energy and tumult of transition and growth. In a way, ‘Roots & Transitions’ functions as a modern theme & variations, with a structure mirroring the natural process of human growth and development.